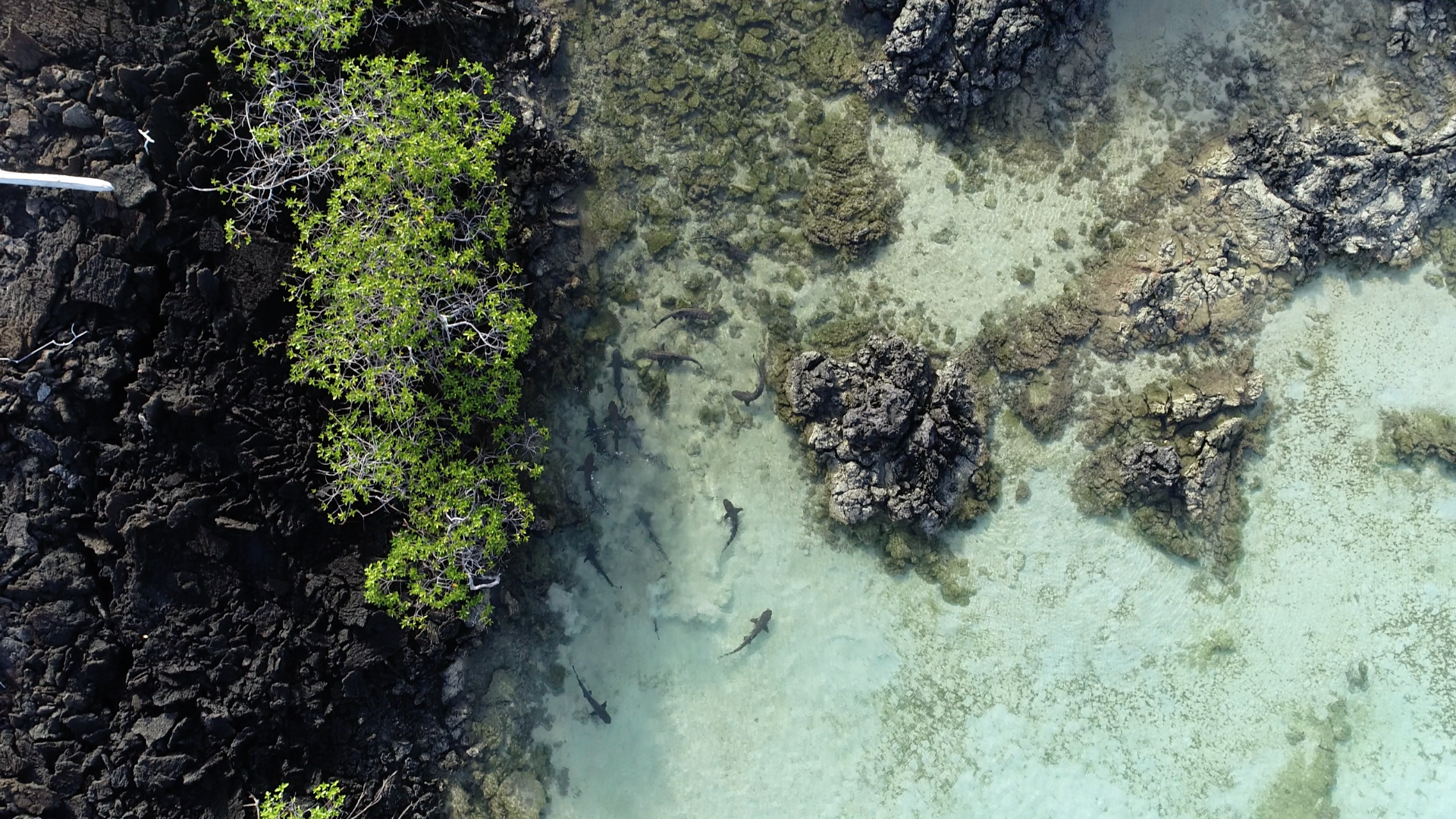 Searching for Shark Nurseries in the Galapagos Marine Reserve

As well as the important Ocean conservation work it does here in the UK, the Ocean Conservation Trust provides grants for other selected projects around the world that align with our mission of connecting people with our Ocean. We’re proud to be supporting the Galapagos Conservation Trust in carrying out vital research into shark nursery grounds in the Galapagos Marine Reserve over the next three years, using state-of-the-art drone technology to collect data.

Here, Project Leader Lauren Goodman, a Graduate Researcher from the University of North Carolina at Chapel Hill, based at the Galapagos Science Centre (GSC) on San Cristobal Island alongside co-supervisor Dr. Alex Hearn, talks us through the progress that has been made on the project so far.

Picture this. You are out in the field with a bird’s-eye view of a completely clear lagoon, waters the colour of turquoise and white sandy bottoms. Then, all of a sudden, you see them; sharks, and not just any sharks -they are babies.

While I’d like to say that this is how my first spotting of a juvenile blacktip shark went, that would be a complete lie. In all reality, I didn’t notice the first baby shark in any of my drone footage until three, I repeat, three days later. It turns out that when you are so concentrated on capturing a specific area within the drone footage, you forget to actually look for sharks. But the moment I noticed the movement of juvenile Blacktip Sharks in my footage was a day of celebration. I vividly remember jumping up onto the chair I was sitting on and yelling so loudly it startled everyone else on the research vessel.

It was the perfect way to find out my ideas were finally panning out the way I had hoped they would. As it turns out, the drone does a great job capturing sharks on video. Now, flying the drone has just become routine. The day before a survey, I pull out all the equipment that I plan on taking to the field with me. I fully charge the batteries and remote control, make sure all software is updated, and pack it all up in a waterproof case for the boat ride.

Why is my work important? While Galapagos is well-known for its diverse marine life, the Islands are most famous for the high density of sharks located within their waters. One of the more commonly encountered sharks around the Islands is the Blacktip Shark. This particular species is known to give birth to babies in nearshore habitats around the Galapagos Marine Reserve (GMR). The babies then use these areas during their first year of life, much like a nursery room for our own newborns. Some of the nearshore habitats have already been studied and these same areas are likely habitats for multiple different juvenile marine species. This research falls under a broader effort to understand multiple shark populations in the GMR through funding from Galapagos Conservation Trust.

The potential nursery areas are particularly important because they likely contribute more sharks to the adult shark population than other habitats. This matters because a large and healthy shark population has multiple benefits, such as increased marine tourism and regulation of smaller fish populations. Thus, to understand shark populations, we need to study their densities. A drone may more accurately capture shark densities in these areas. Additionally, the idea that drones have the capability to conduct small-scale surveys of large animals at a much lower price than traditional methods has also caught on in the conservation management field.

The methodology for our studies is quite simple. First, at each site we fly a predefined path filming video with the drone. These flights include areas that we currently believe may be baby shark habitats and areas where we don’t expect to find any sharks.

The potential nursery areas are particularly important because they likely contribute more sharks to the adult shark population than other habitats.

When the drone flight is complete, a large gillnet (a fishing net with buoys on top that move when something is caught) is thrown into the water and the area of interest is blocked off for an hour. During this time if sharks are caught in the net, they are captured, tagged, and health measurements are taken. The number of sharks caught in the net within one hour is then compared to the number captured on video by the drone. This requires multiple people to watch the drone footage and independently count the number of baby blacktip sharks in each site per month. A ranked system measuring shark abundance across sites using both survey methods will allow us to determine which sites have the highest abundance of baby sharks and how each method compares within and across sites.

While simple, this research is incredibly important to better understand where these baby sharks are and what the best way to measure their abundance is. Additionally, drone surveys may prove more efficient and less invasive than the traditional methods used to understand abundance of baby sharks.

Through this research, I hope to influence the expansion and protection of essential fish habitats and shark nurseries around the Archipelago. While previous survey methods have worked, it is my hope that drone applications will become the quicker, safer and cheaper method to search for shark nurseries.

Although this pilot survey is largely focused on one island, San Cristobal, there is potential for expansion if we prove that drone surveys are more efficient than traditional methods.

This technology could, ultimately, be used to increase the protection of nursery areas and ensure the Blacktip Shark population in Galapagos is conserved. Additionally, it will likely extend to multiple different species of sharks, such as the Scalloped Hammerhead. And who knows? Maybe population surveys of many different species can be improved upon through the use of drones.

To find out more about the project, please visit: https://galapagosconservation.org.uk/projects/endangered-sharks-of-galapagos/