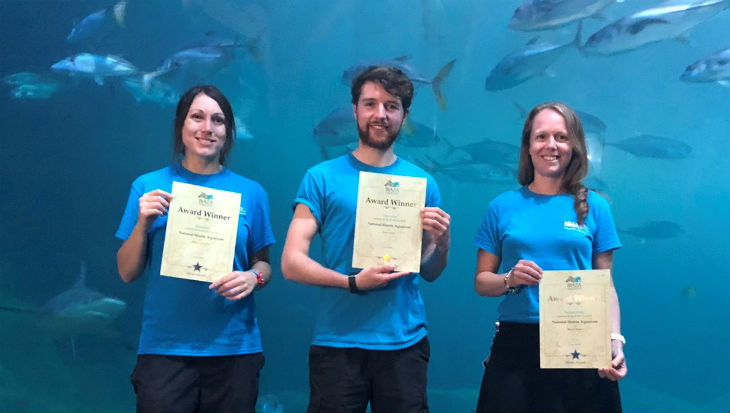 The Ocean Conservation Trust has been awarded three coveted accolades at the British & Irish Association of Zoos and Aquariums Awards at a prestigious event last month for initiatives run at its centre of Ocean Excellence in Plymouth, Devon.

The Ocean Conservation Trust is the only member of the respected BIAZA Association to have won an award for an aquarium this year, walking away with a Gold Education Award for its exciting Ocean Squad teen activity club, which is run at the National Marine Aquarium (NMA) on Plymouth’s historic Barbican.

From science experiments and sustainable seafood cooking to snorkelling safaris and boat trips, the club, which launched in 2018, is designed to engage teenagers aged 11-15 in the Ocean environment through a range of fun activities. It also supports the Ocean Conservation Trust’s mission to connect people with the Ocean, educating them in a fun and engaging way about the important role it plays in our lives and our futures – as well as the impact we, as humans, have on it.

The night’s successes didn’t end there, and the Ocean Conservation Trust was also honoured with a Silver Sustainability Award for its efforts in reducing its consumption of single-use plastics, as well as for its role in Plymouth Plan for Plastics – for which it is the flagship employer. In partnership with local businesses and organisations including Environment Plymouth, Plymouth Waterfront Partnership and Plymouth City Council, the Ocean Conservation Trust has played a central role in engaging the city and local community in a bid to combat the issue of plastic pollution in our Ocean.

Rounding off a hat-trick of awards for the Ocean Conservation Trust, it was also recognised with a Silver Education Award for the special educational needs programme it runs for two Plymouth schools – Mount Tamar School and Longcause Community Special School. Set up to provide pupils with the opportunity not just to learn about the Ocean and its importance but also to increase wellbeing, personal career aspirations and confidence for every pupil involved, the programme recently came to an end after starting back in January 2018, and saw 120 school children aged between 5 and 15 benefitting from weekly sessions held at the NMA.

Nicola Bridge, Head of Conservation Education & Communication at the Ocean Conservation Trust, said that she was delighted to see the charity being recognised for its ongoing efforts, which put people at the centre of key Ocean conservation issues and connect them with the Ocean in order to inspire positive change.

“As a long-standing member of BIAZA, it’s an honour to be recognised for our efforts in both sustainability and education. As an Ocean conservation charity, it is our mission to do all that we can to protect the Ocean, and by connecting people with it in ways that are meaningful to them, we are able to inspire positive behaviour changes. Often that means working with a range of different groups, and that includes the teenagers who participate in our hugely successful Ocean Squad activity programme, which continues to go from strength to strength.

“Many of us are now aware of the impact that plastic pollution is having on our Ocean, and as an Ocean conservation charity, we’re committed to reducing the amount of single use plastics we consume at our Aquarium. We’ve made significant changes within the building, including making the switch to fully compostable coffee cups, lids, straws and sandwich packaging and plastic-free uniforms, and provide all staff with reusable coffee cups for their personal use. We also organise monthly staff beach cleans on nearby Teats Hill beach, to minimise the amount of plastic waste going into the Ocean here.

“Of course, it’s not just about making changes ourselves, but about inspiring others to do the same, too. On an educational level, our Plastic Seas workshop teaches school children all about the impact of plastic pollution on the Ocean, encouraging them to make positive adjustments to their own lifestyles and do their bit to reduce the effects. We arrange regular public beach cleans, and incorporate vital plastic pollution messaging into our talks, shows and events to raise awareness of the issue and show people what they can do to help.”

The NMA is run by Ocean conservation charity, the Ocean Conservation Trust. With over 20 years of experience in conservation education and communication behind it, the organisation takes an optimistic approach which puts people at the centre, helping them to understand how they can be a part of the solution. It works directly with people in face-to-face interactions at the NMA, as well as via a range of national and international programmes.

The British Association of Zoos and Aquaria (BIAZA) has over 100 zoo and aquarium members who pride themselves on their excellent animal welfare, education and conservation work. Its prestigious awards, which are given out annually, are designed to celebrate excellence across a range of categories including Sustainability, Education and Conservation.