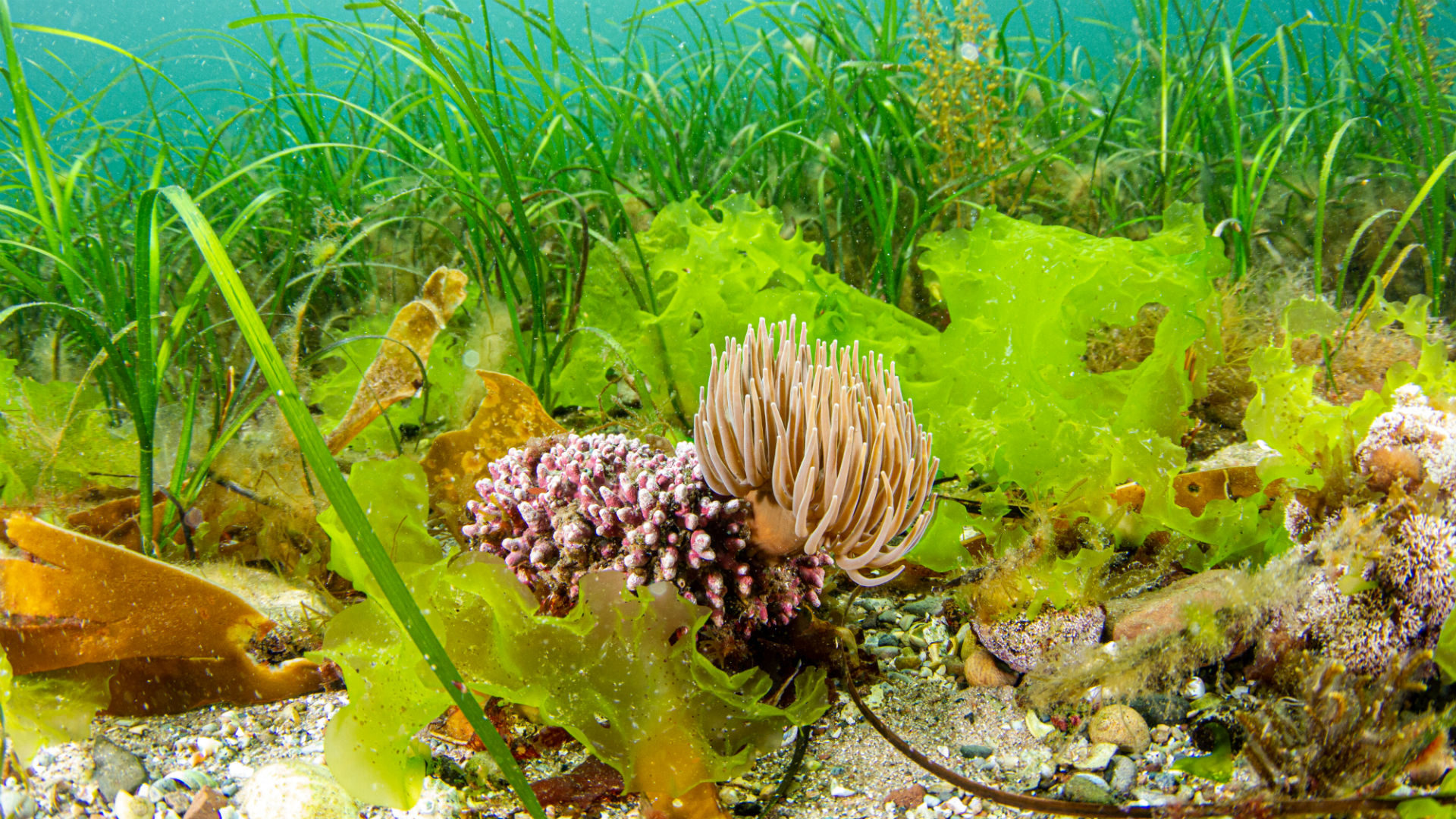 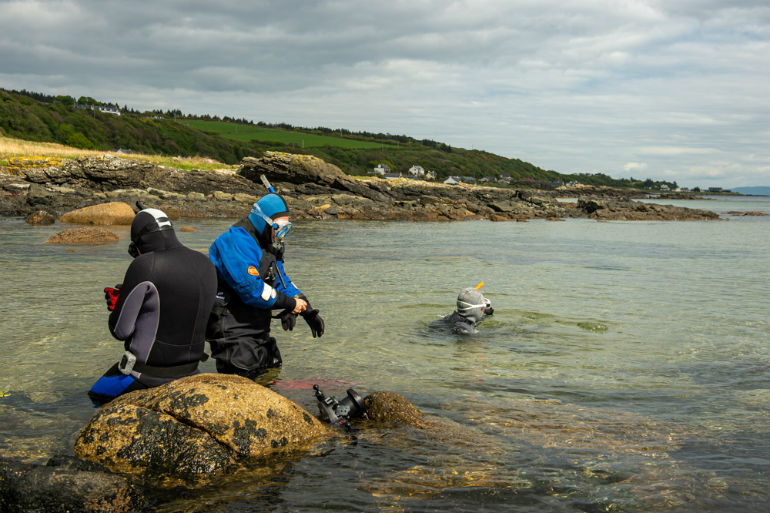 Here at the Ocean Conservation Trust, we are pleased to provide grants to Ocean conservation projects that align with our mission to connect people with our Ocean. One of these projects is the Community of Arran Seabed Trust (COAST)’s community seagrass project, which has seen the Trust engaging the local community of Arran in the monitoring and filming of South Arran Marine Protected Area’s seagrass beds. In our latest blog, Richard Shucksmith, who coordinated the project, explains how it was successfully carried out

It was exciting to be working with COAST (Community of Arran Seabed Trust) on the Island of Arran – an organisation and a place that is close to my heart. This time, it was different from my usual approach where I do all the filming. I had been lucky enough to bump into Manuela, the Communications Officer for COAST, at a marine conference, and we spoke at length about using our different skillsets to engage people with the seagrass beds around Arran. Manuela knew about some funding that we could apply for from the Ocean Conservation Trust, so we set about writing a proposal to put forward.

The main aim was to connect people to the Ocean – ultimately seagrass beds, in this case.  It is vitally important that we help local communities to understand their importance as one of the most valuable habitats on the planet, supporting hundreds of different species and acting as a nursery for young commercial fish. Not only that, but they also help to reduce coastal erosion, and – significantly – climate change, with the ability to sequester up to 35 times more carbon that a rainforest. By helping people to experience and understand this, we can show them the need to protect and preserve seagrass beds in the Arran area.

We came up with the idea of making a community-led film about seagrass by engaging local people to take part and make the film. Through doing so, they would learn about the importance of seagrass and what can be done to help it thrive, as well as getting a feel for visual storytelling in the process. The result would be a film of around three minutes in length, which would be used to inspire other people in the locality to look out for seagrass, and make their films about marine life.  We were lucky and were successful with the funding application, so the fun begins.

I arrived on Arran at the beginning of May for the week, initially to check out some of the seagrass sites before the workshops started.  As ever, it was great to meet up and stay with Howard Wood, one of the founders of COAST and who has spent his life fighting for better protection of the marine environment.  We were soon out diving and checking out seagrass sites in the area in preparation for the workshop.  It is always exciting to explore these magnificent beds, and is always punctuated with great anticipation as I roll off the side of the boat.  It rarely disappoints, and 5m below I dropped on to a lush seagrass bed. With sunshine streaking through creating beautiful twinkling streams of light, I was in paradise.

I met the participants first thing on Saturday morning, at the Octopus Centre that is run by COAST.  What a great centre this is, full of information and a marine tank for people to see the local marine life. If you are ever on Arran, then it is well worth a visit.  We started by setting out the structure of the weekend and what we wanted to achieve by the end of it. 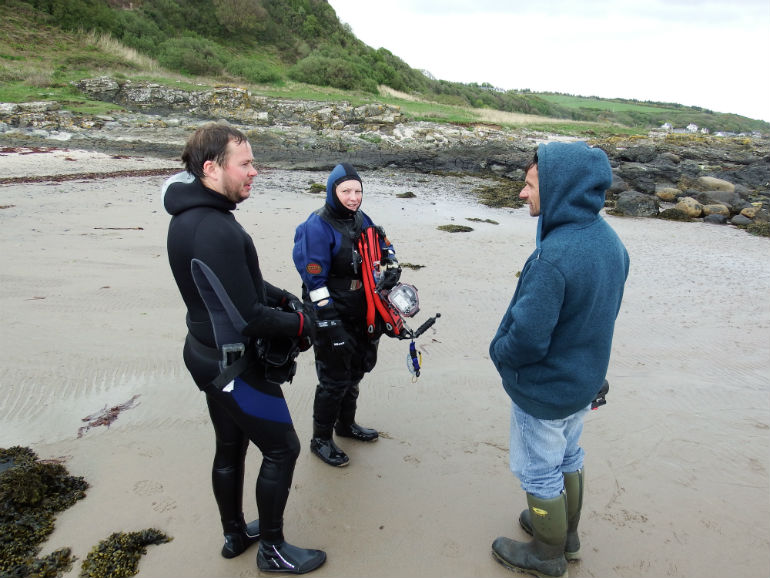 It took several attempts to get just the right shots

To make any film, you need a story, so first of all, we researched seagrass to find out more about this habitat, as well as how important it is and the problems it faces. Once we had set out our story then we looked at cameras, how to film, what type of shots would we need to tell the story of seagrass. Then, we made an informed decision on what we wanted to achieve, the weather forecast and with the local knowledge of Howard, we decided on a beautiful sheltered bay at the south end of the island, ideal for filming by snorkel.

So, armed with our cameras and our newfound knowledge, we set out to explore and make a film about seagrass.  A note here that good snorkelling practices were followed at all times, such as going slowly, avoiding touching marine life, being aware of our environment, and watching our fins so as not to disturb the seagrass, all to ensure that we were minimising the risk of the activity having any negative impact up on the habitat.

The first field session proved to be great fun, and most importantly, we found lots of seagrass.  As we shot different sequences to tell the story, we soon realised that if we were going to get the close-up shots of seagrass we wanted, we would need to be there on precisely low tide.  With the memory cards full, we went back to Octopus Centre to go through and catalogue the footage and start the edit of the film.

The cameras used during this filming session were a variety of Gopros ranging from Gopro 4 to the latest version.  They make ideal cameras for this shallow water filming.  First of all, they are relatively cheap, small and compact, waterproof to 10m without housing and have stabilisation for smooth footage.  The downside is they do not allow close focus unless used with a special filter; the closest they focus is about 12 inches away from the subject.

We also used DSLR camera in housing for some of the close and above water shots, and a drone for the aerial footage.  However, the whole film could have been shot on a GoPro, and any camera that does reasonable footage could be used.  Even mobile phones create excellent footage these days and will shoot 4k.

After looking at and cataloguing the footage from the day before, we had a list of shots we needed to get the next day.  Armed with this information, we went back to the same site at low water so that we could get close to the seagrass.  It is a beautiful place and with the sun shining, the seagrass was a vivid green with snake-lock anemones and red coralline algae on the rocks dotted amongst the seagrass bed. Even the non-native seaweed sargassum that should not be there looked beautiful amongst the seagrass.   It was a psychedelic of colour created by the sun’s energy and the diversity of plant growth along this stunning coastline. 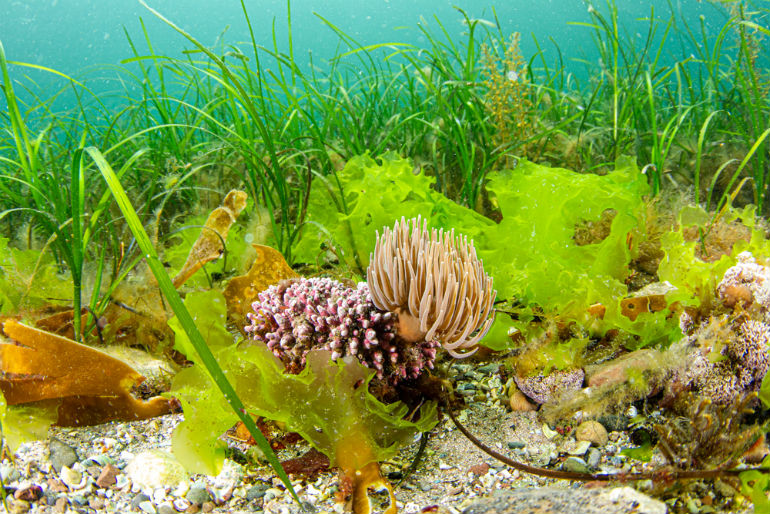 After the snorkel, we went back to the Octopus Centre to go back through the footage and finish developing the script.  Anne Peck volunteered to do the voice over, and everyone had their part to say about seagrass in front of the camera.  We had decided to do this on the shore, but as we arrived, it started to rain.  With time running out as some people had to catch a ferry that evening, we began to wonder if we were going to get last part done.  Sun shone through a break in the cloud, and a rainbow appeared. This was our time; now or never – so we quickly headed out on the shore, and everyone did their piece to camera.

There ended a great weekend. I hope you enjoy the film as much as we all did making it.  I had great time working with everyone, and we all learnt a lot from our experience.

Big thank you to Ocean Conservation Trust for funding this project; without it, it would never have happened. A big thank you to COAST, to Jenny Stark and Paul Chandler for being so helpful and bringing the project together.  And a big thank you to all the participants for making such a fun experience, Anne Peck, Simon Sloan, Hayley Woodroffe, Sue Ash, Manuela de los Rios, and Alexander Macbeth.

If you’d like to see the resulting video created by Richard Shucksmith and the team, then keep an eye out on our social media pages for some footage coming up next week.