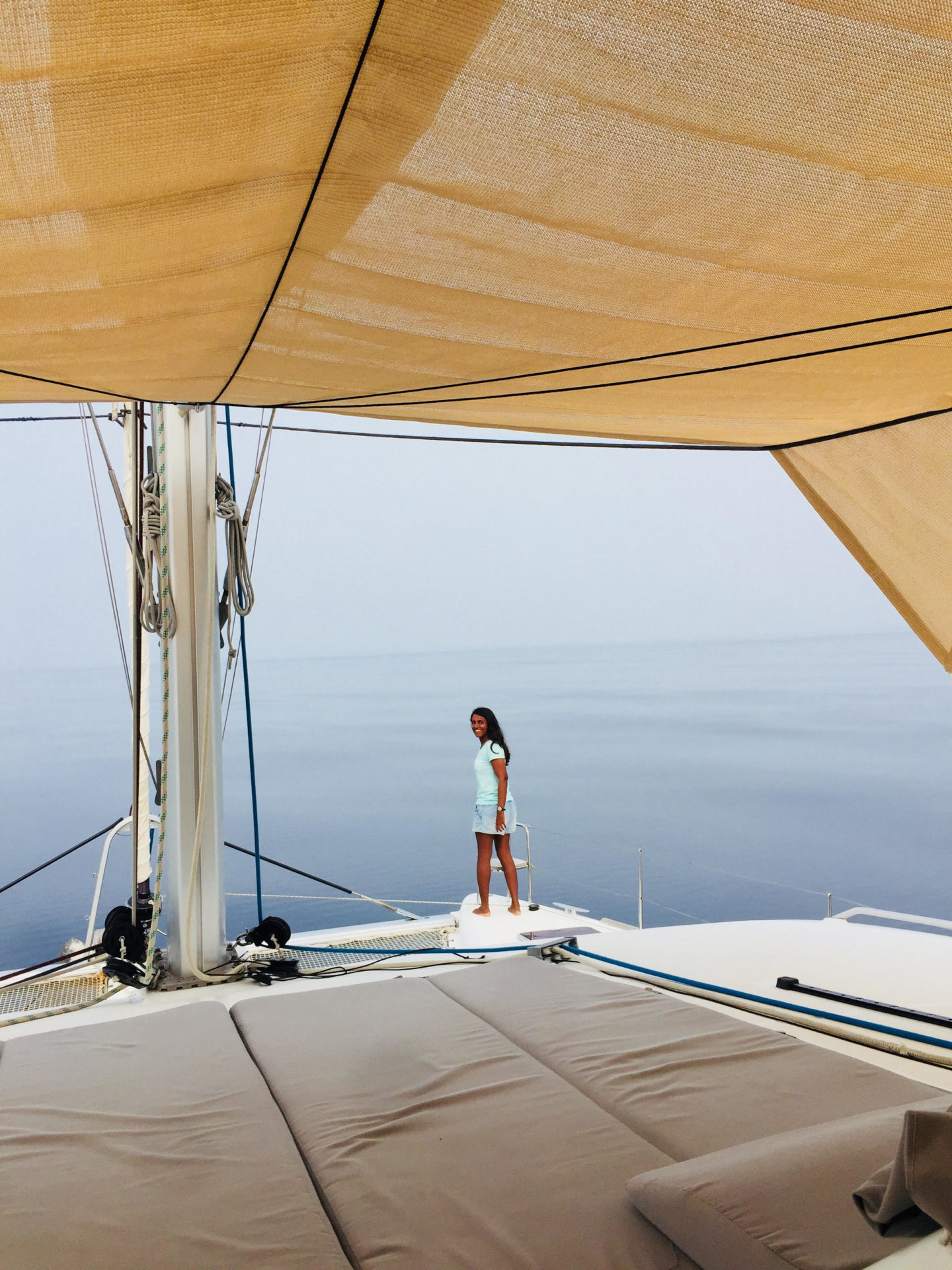 At the Ocean Conservation Trust, we put people at the heart of our mission.  That’s why we want to bring together a group of individuals who are passionate about the Ocean to become our Ocean Advocates.

Our Ocean Advocates use their online voices, through social media and beyond, to help people to Think Ocean, and to realise that making some small changes in their daily lives can have a huge positive impact.

Mariyam Niuma (Ni) is an avid traveller, ocean lover and photographer from the Maldives.

She has been chasing adventures for as long as she can remember, starting from her annual trips to her family island in Laamu Atoll, Maldives where she spent many hours exploring the beach and the reefs around the islands with her cousins. Her life changed when she learnt to swim in her late 20s and then got into scuba diving, freediving and surfing in her early 30s; activities which are not common for women from a conservative culture like the Maldives.

She is one of the first (and few) woman surfers from the Maldives and worked as the only woman surf photographer in the country. Ni spends a lot of time slow travelling around the world, sharing her adventures and experiences through her blog and social media. She is also a part of Zero Waste Maldives, a local non-governmental organisation established in the aim of promoting a zero waste low impact lifestyle in the Maldives. Ni hopes to inspire more people to get outside and get active in the water, so that they will also fall in love with the ocean just like she did.

Esther has had training from renowned organisations such as National Geographic Society, Future Learn and United Nations Institute of Training & Research, she has become progressively aware of the damage occurring to our ocean.

She therefore finds joy in sharing thoughts and information that compel people to care about the Ocean and protect it.

Esther is a Steering Committee member with Kenyan Youth Biodiversity Network, an organization that mobilises youth action to halt biodiversity loss through policy and advocacy. Esther was recently sponsored as an Emerging Professional Member by the National Marine Educators Association – an opportunity through which she anticipates to advance marine action in Kenya through Ocean literacy. She has also had the opportunity to volunteer with Tree Shake in collaboration with World Animal Protection in the

#NoTanksExpedia Campaign against Dolphin Captivity and with Marine Education Centre in helping organize the 2nd Annual Diani Sea Turtle Festival at Safari Beach in the South Coast of Kenya, where she engaged in creating awareness on sea-turtles & Ocean conservation. Esther has also been a panelist and social media campaigner on work regarding life below water, climate and plastic pollution on several platforms. Esther’s goal in life is to inspire land-marine conservation and galvanise action for protection of these ecosystems.

Sudarsha is also known for his social activism which began in 2009 as he initiated the platform for young people in Sri Lanka Earthlanka Youth Network. His youth platform is a key stakeholder for marine and coastal conservation in Sri Lanka. He has held many positions in many international summits related to climate change, biodiversity and media. He is also completed his postgraduate on Development Practitioners in University of Peradeniya Sri Lanka.

Holly the founder of Clean Sailors and Cleaner Marina, all about mobilising our global sailing and marine industries in conservation of our seas.

With over a thousand nautical miles of sailing under her belt, a core background in business, from private-equity ownership to listed companies, and experience with various international development organisations, Holly set up Clean Sailors to engage sailors and water-lovers in safeguarding the future of their passion – the sea. She’s a Sustainable Ocean Alliance Ocean Leader and Henri-Lloyd Pioneer.

She has a keen interest in environmental science and oceanography and is an advocate for the protection of our ecosystems, particularly where water quality is concerned.

Wayne is the founder of Sail Electric and the North Devon Marine Project, a venture created with the aim of replacing fossil fuels at sea with renewable energy. Wayne sails without diesel having converted Nazca a 34ft sailing vessel to fully electric, that he uses for marine science exploration, and is leading a decarbonisation strategy for sailing vessels. His aim is to gather data to understand the human impact on the Ocean, devise applicable solutions and use the findings as an educational platform.

He moved to North Devon just over ten years ago to be closer to the sea and started an off-grid renewable energy venture with his partner, helping people understand how to live more sustainably, within the means of their natural resources, a concept which they fully embrace themselves as their converted container house runs on solar and wind energy. He hopes to share his passion for sustainable energy with sailors and the public around the world.

Hannah believes the understanding of our natural world and the threats that it is under should be knowledge accessible to all. Through this belief she formed her business Science Animation Studio, creating educational graphics and animations for scientists to connect the general public with the scientific world. She also works as an onboard marine educator, teaching disadvantaged kids about marine life in Plymouth Sound.

On top of this, she taught herself how to create graphics and animate them in order to create explainer videos about marine science. She has since worked with scientists, promotion teams and a school to create engaging visuals in order to invite a wider audience into the important topics we see in current research. Hannah has created content on topics such as ocean acidification, invasive species, food security and antibiotic resistance and she is loving every second

Liberty’s desire to understand and protect the ocean stems from her childhood filled with memories at the beach and being in the ocean, fascinated by everything within it. From there, Liberty grew her particular interest in sharks. As she got older she found SCUBA diving, freediving, surfing and paddle boarding allowed her more access to the marine world.

This fascination carried into her academic life, where she is now a final year Marine Biology and Coastal Ecology student at the University of Plymouth. Liberty has also worked with Shark-lab Malta, Marine Dynamics and the Bimini Sharklab in an effort to understand and protect sharks. She hopes to use her scientific background to create research orientated documentaries, showcasing the various threats sharks face and what potential solutions can be implemented.

Henry is due to finish his BSc in Marine Biology and Coastal Ecology at the University of Plymouth in June 2021. As part of his BSc, he took the opportunity to take a placement year to explore career interests. He had the privilege to work alongside Dr. Kasper Hancke and a team of researchers at the Norwegian Institute of Water Research (NIVA) in Oslo, on the Frisk Oslofjord project.

The project delved into the prospective use of using flying drones (UAVs) mounted with specialised cameras to capture multispectral images of large areas of coastal shallow waters. Henry chose to build a habitat classification tool using these images. He gained first-hand experience of life as a researcher, working full-time in the research institute’s head office. He felt like one of the cogs, part of the mechanism helping to drive novel research forward, as a community; He hopes to work with NIVA again as part of my master’s thesis next year and bring this research across the North Sea to the UK.

We connect people with the Ocean so that they connect with it, learn to love it and want to protect it.

Step 1: Post photos and videos of the Ocean and use the #thinkocean hashtag!

Step 2: If you love the Ocean and are interested in joining our positive people movement, send an email to clare.baranowski@oceanconservationtrust.org to get a conversation started.